The Delhi Durbars were grand events organised by the Viceroys to mark the coronations of Emperors or Empresses. Hence, these were also known as the Coronation Durbars. Durbar which means a ‘court of a ruler’ in Persian was adopted by the British from the Mughals. The idea was to come across to the people of India as the’ heirs of the Mughals’.

The Viceroy, Lord Lytton seated in the centre at the Imperial Assemblage of 1877

In 1876, Queen Victoria in addition to her title of 'Queen of Great Britain and Ireland' assumed the title of ‘Empress of India’. The Viceroy, Lord Lytton was asked to proclaim this on her behalf throughout India. He decided to hold an Imperial Assemblage at Delhi on 1st January 1877 for this purpose. All the Governors, Lt Governors, Heads of Administrations, Ruling Chiefs, Princes and Nobles were invited for this historic ceremony. The magnificence of this event can be understood from the fact that the number of people who attended this ceremony were greater than what the Viceroy had anticipated.

The Assemblage met in pavilions built in an open plain. The Viceroy on entering into the pavilion was welcomed with the Royal Salute and was made to sit on the Viceregal Throne in the centre. Governors, Head of Administrations, Ruling Chiefs, Native chiefs and other high officials sat in a semi-circle facing the throne. 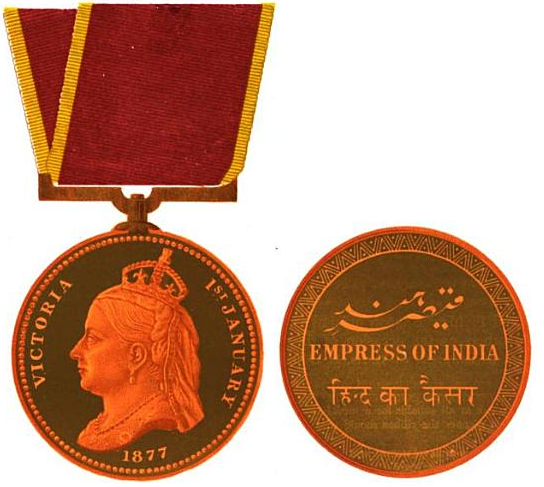 The Proclamation was read out in English and in Urdu at the Assemblage and this was followed by a salute of 101 salvos of artillery. The Viceroy then addressed the gathering and conferred each chief with a Gold Medal and a Banner in the name of the Queen.

Two significant decisions taken at this Durbar were:

In British India, the Salute for Her Majesty the Queen and Empress was hundred and one guns, for the Viceroy of India was thirty-one guns. Other important chiefs of India were given 21, 19, 17, 15, 11 and 9 gun salutes depending on their relationship with the British.

The second Durbar was held in 1903 and was not just an Assemblage but a grand affair that everybody wanted to be a part of. This Durbar marked the succession of Edward VII. On the orders of King Edward VII, it was attended by the Duke of Connaught.

This week-long celebration which also included polo and football tournaments had to be well planned and organised for which a Durbar Committee was set up. The guests who came for the Darbar stayed in the Provincial Camps that were well-equipped with electrical and sanitation facilities. They would have string bands playing at night which shows that these camps were active throughout the day.

Maharaja of Benaras was eager to hoist his ancestral flag at his camp as his father was given this privilege at the 1877 Darbar. He wanted the same privileges for himself which was granted to him by the Darbar Committee. 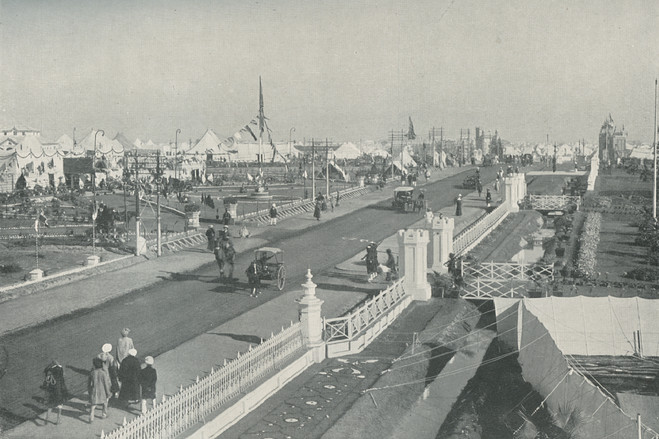 Camps set up for the Delhi Durbar 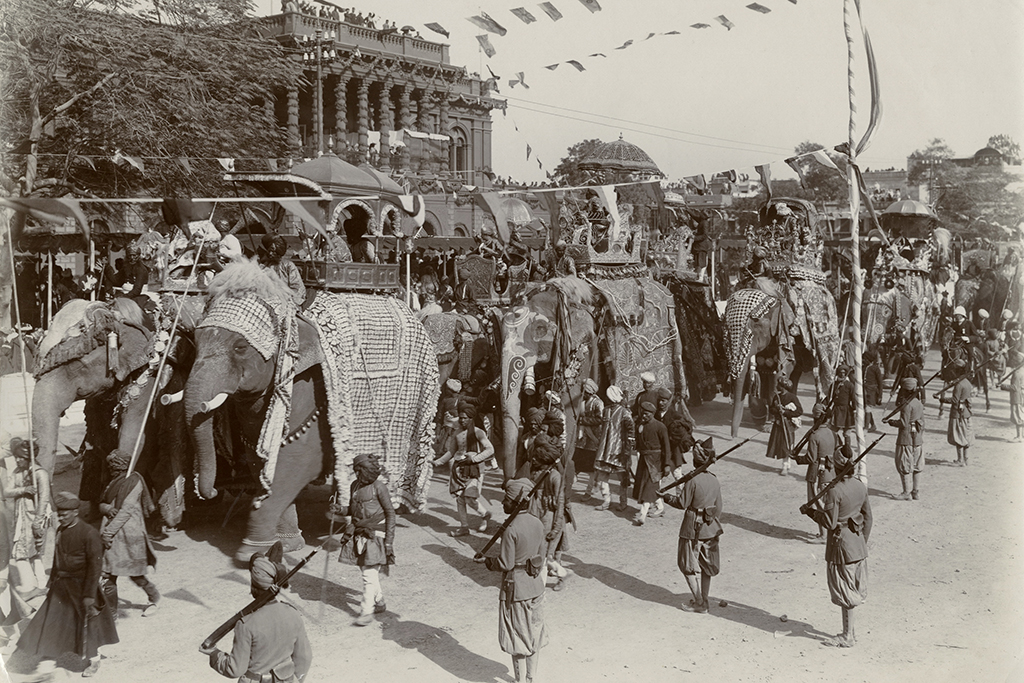 The most awaited event at the Durbar was the Royal State Entry. People gathered in large numbers to watch the Royal procession. This Darbar had the procession scheduled for the 29th of December 1902. It started off with the arrival of the Viceroy at the station where the bands played the British National Anthem. He was received and greeted by the Ruling Chiefs and other officials. Following this was the arrival of the main guests of the event; the Duke and Duchess of Connaught. On their arrival, the bands at the platform played the British National Anthem and they were given the Royal Salute.

The Viceroy and the Duke and Duchess of Connaught mounted the elephants outside the station and from there the elephant procession began. It proceeded from the Queen’s road, round the Jama Masjid via Chandni Chowk to the ridge by the Flagstaff Tower and finally concluded at the Viceroy’s Camp.

The main event of the Delhi Durbar was the Coronation ceremony on 1st January 1903. For this, an amphitheatre was set up. It was divided into different blocks from A-Y. Seats were predetermined and allotted to the various guests of the Durbar on the basis of hierarchy.

One of the major points of concern for the Durbar Committee was the seating arrangement for the Begums who accompanied the Maharajas at the Darbar. Hence, Block Y of this amphitheatre was reserved only for the purdahnashin(veiled) ladies. There were in total fourteen ladies for whom seats were reserved in this block. 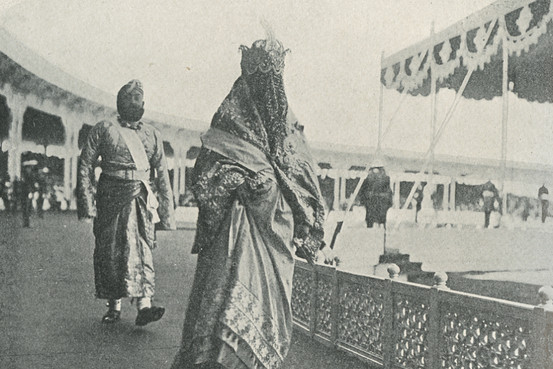 Begum of Bhopal at the Delhi Durbar
Image source: The Alkazi Collection 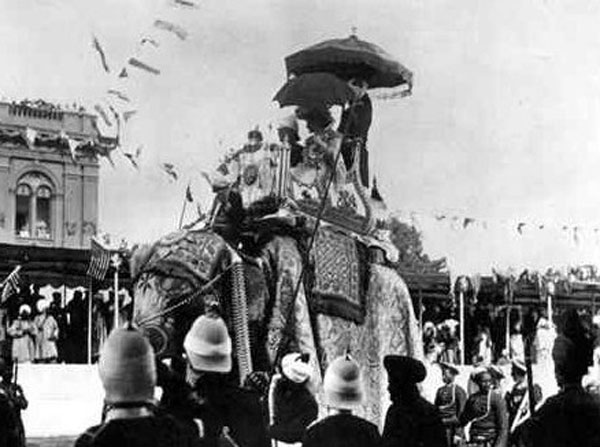 Lord and Lady Curzon at the Delhi Durbar of 1903

Two major events organised in the 1903 Durbar that made it unique were: 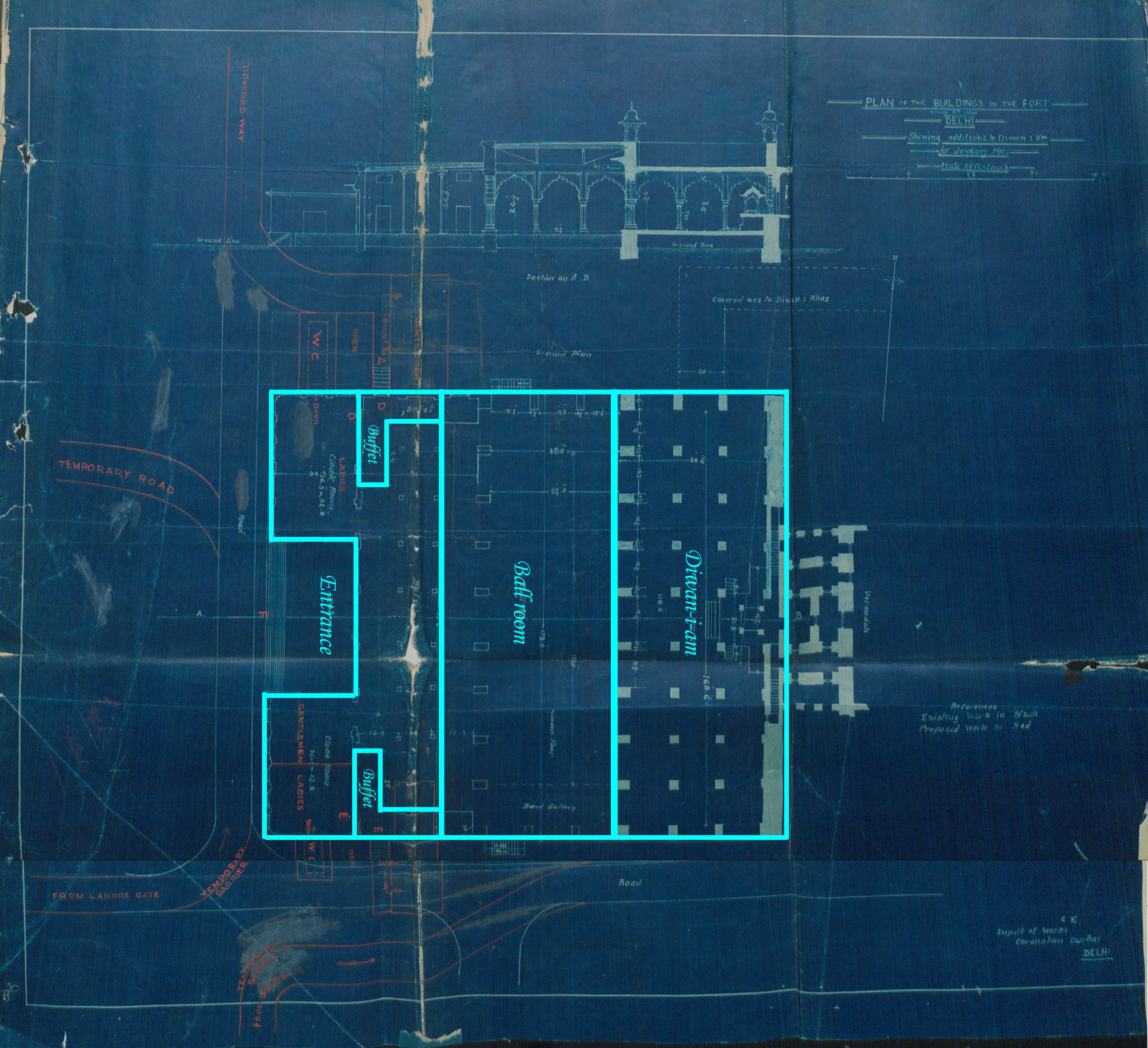 Plan of the buildings in the fort of Delhi
Image source: National Archives of India

The Investiture ceremony also held at the Red Fort was where many Princes and officials were awarded the gold and silver Delhi Durbar medals for their contribution to British India. In fact, the Nizam of Hyderabad misplaced the gold medal given to him. He wrote letters asking for a replacement which eventually the Viceroy agreed to give for free.

This Durbar was also a significant one as a large Telegraph Office was established in the Central Camp. The Viceroy’s speech of 1st January was telegraphed to the London Office. This was the first time a speech had been telegraphed in India.

The Darbar of 1911 marked the succession of King George V. This Durbar was historic for two reasons; one it was the only one attended by the Emperor himself and second, this was where the shifting of the Imperial Capital from Calcutta to Delhi was announced.

The Royal State Entry was one of the major events of the Durbar that had to be carefully planned and organised by the Darbar Committee. The procession included the Viceroy, troops of His Majesty’s Escort, Ruling Chiefs, the staff of His Majesty Escort and other officials. There were many discussions regarding the arrangement of the procession and whether the chiefs should be a part or not. After several proposed schemes it was decided that the Chiefs would follow the Royal procession. The procession of the Ruling Chiefs was led by the Nizam of Hyderabad who was entitled to 21 gun salute. 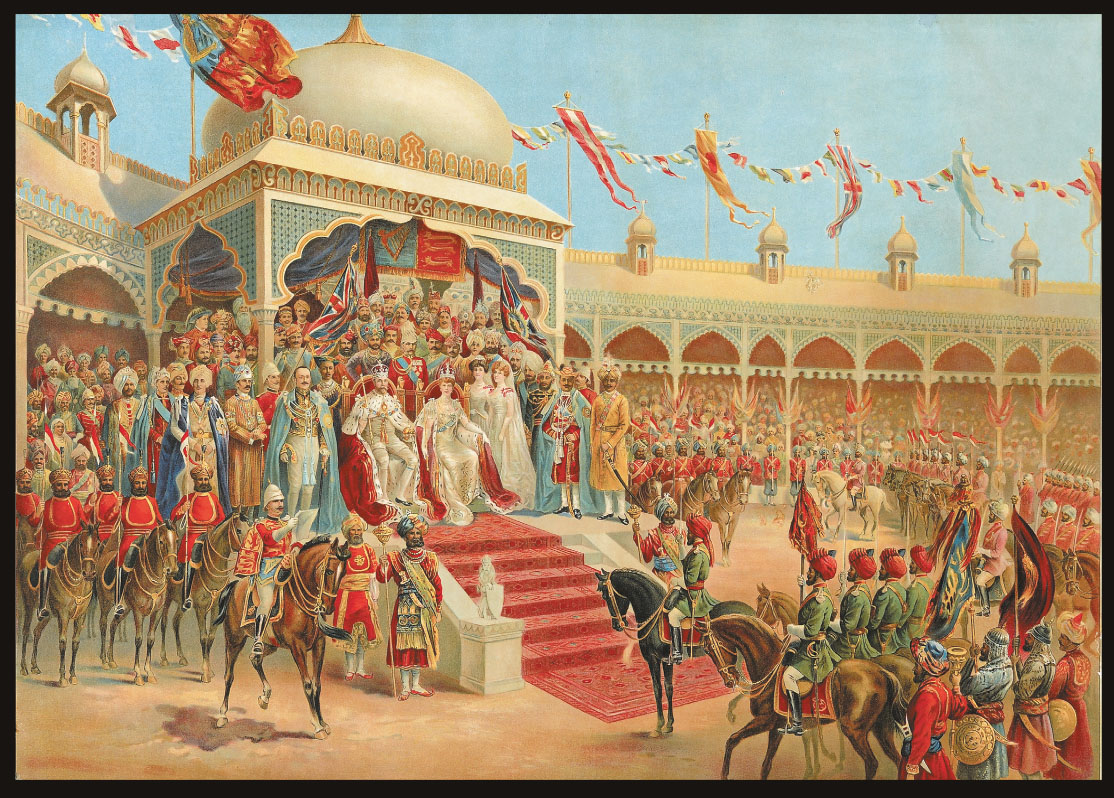 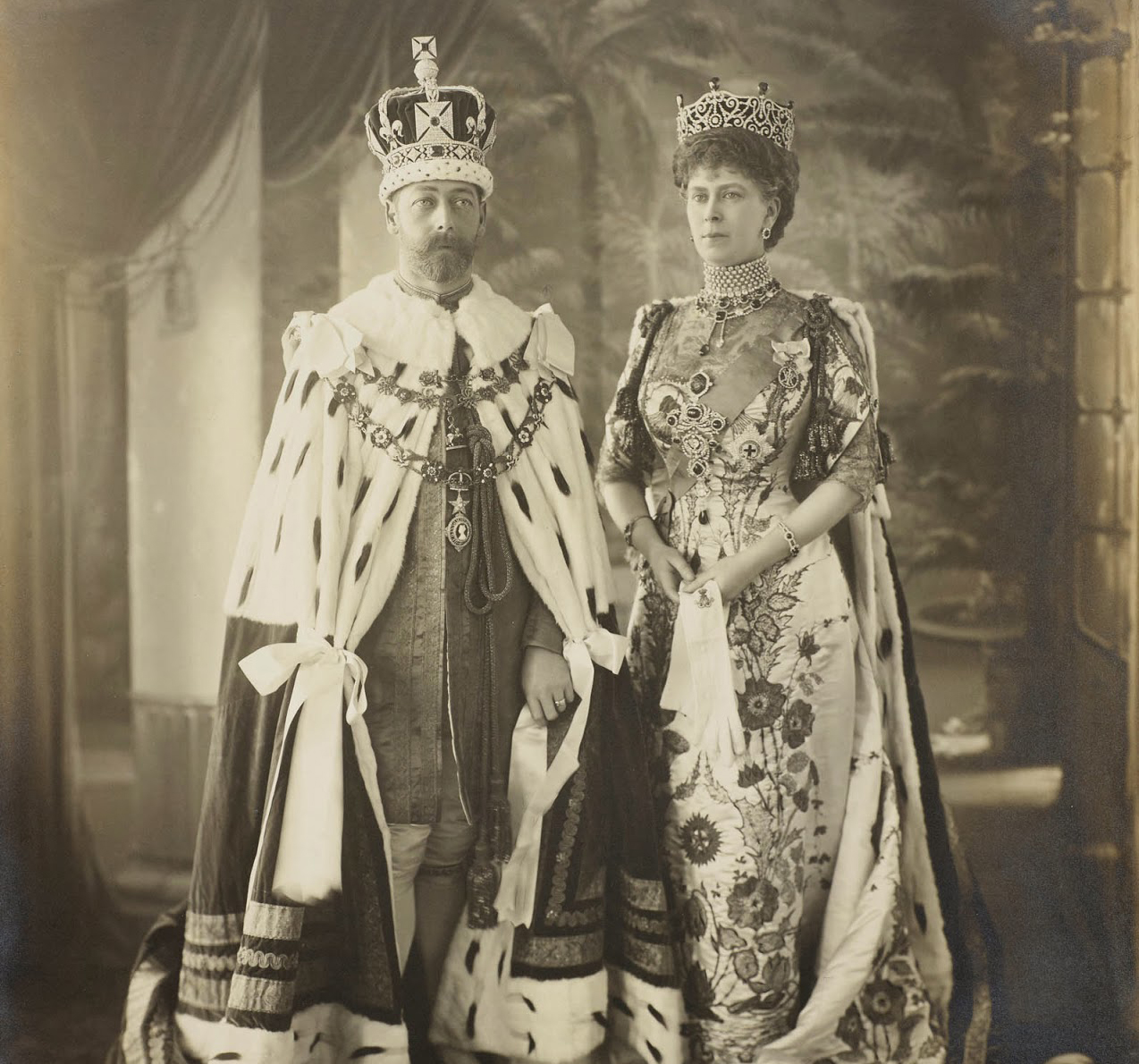 The Emperor and the Empress reached Delhi on the 7th of December 1911. They travelled from Bombay by the Baroda, Bombay and Central India Railway via Mathura, Agra and Tundla. They arrived at the Salimgarh Station Bastion instead of Central Station. Their arrival was a glorious one with bands playing at the station and the 101 gun salute. From the station, they proceeded to the pavilion near the Salimgarh entrance where the Ruling chiefs and other officials waited for their arrival. The Royal Procession began after the Imperial Majesties were addressed by the Vice President of the Council and the Governor-General. 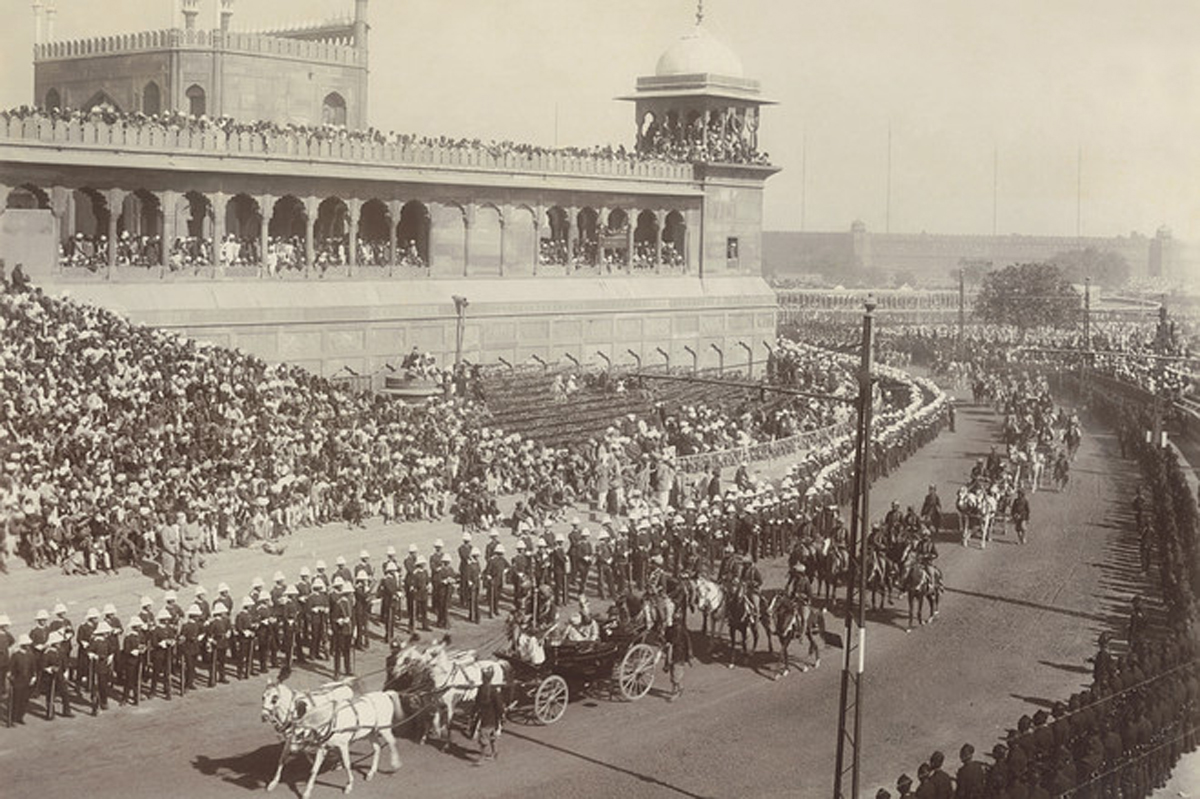 The Proclamation Ceremony took place on 12th December in the Durbar arena which had two amphitheatres on the same site as the previous Durbars. The larger, outer one called the Spectator's Mound was for the general public. The other smaller amphitheatre was reserved for the esteemed guests of the Durbar.

This Proclamation Ceremony of 1911 was much talked about for various reasons. Firstly, the Maharaja of Gaekwar after arriving at the amphitheatre removed all his jewellery except his Star and medals and handed them over to his son who was sitting behind him. This behaviour of the Maharaja was considered rude for which he apologised later. 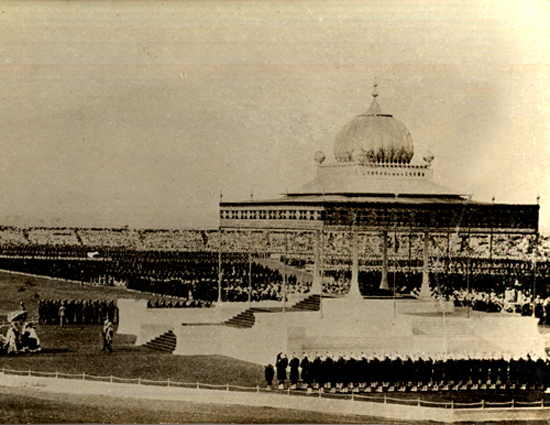 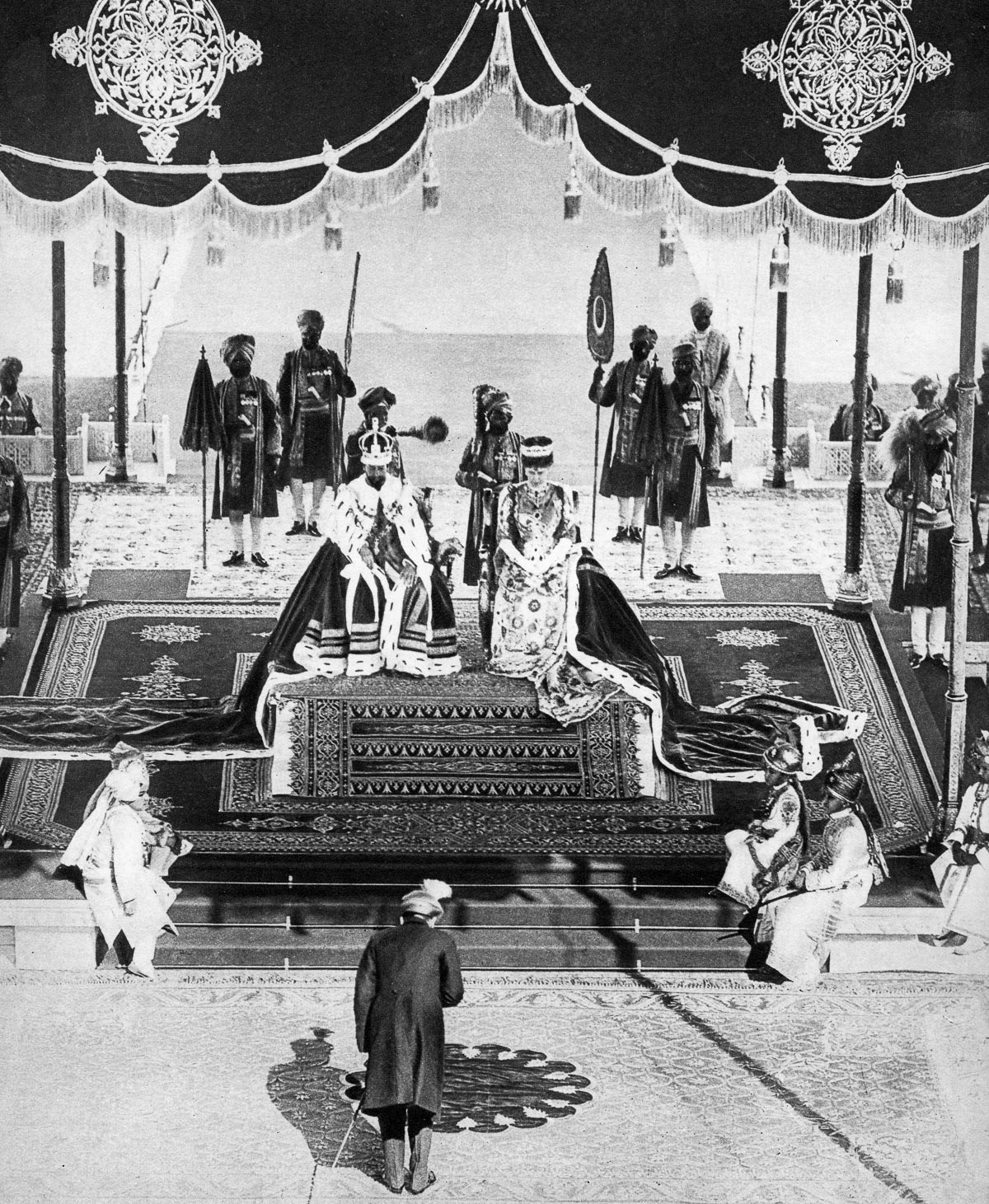 The Nizam of Hyderabad, Mir Osman Ali paying homage to the King and the Queen at the Durbar of 1911

Secondly, the planners of the Darbar had some idea long before the Ceremony that few Ruling Chiefs were not in favour of bowing before the Emperor for the Homage Ceremony. They were expected to bow three times before their Imperial Majesties and walk back to their places in reverse. They wanted to meet the Emperor but as equals. Hence, on the day of the Ceremony, Maharaja of Gaekwar during his homage to the King and the Queen partly bowed, just once, turned around and walked to his place. His behaviour at the Delhi Durbar was written about in many newspapers as it was considered highly disrespectful on his part. He later apologised on the advice of the British Resident in his court.

After this major incident at the Delhi Durbar of 1911, the British realised the kind of resentment that prevailed in the minds of the Indians. Though a fourth Durbar was much thought of, there were various reasons why it could not be executed. Firstly, King Edward VIII had abdicated the throne and that created chaos. Secondly, certain developments that emerged in parts of Europe which eventually led to the Second World War kept the British occupied. In addition, by this time India was drained of its wealth to such an extent that even the thought of a grand affair like that of the previous Durbars seemed impossible.

Gold Medal and a Banner

proceeded from the Queen’s road,

Vice President of the Council

shifting of the Imperial Capital