The Padmanabhaswamy Temple and the Royal Family of Travancore

Travancore, locally known as Thiruvananthapuram or Trivandrum is currently the capital of Kerala. Previously known as Ananthasayanam named after Lord Vishnu, Trivandrum has many legends associated with its origin.

It is believed that the origin of Trivandrum is connected with the origin of the Padmanabhaswamy Temple. One of the stories associated with it is that of a woman who found a baby boy in the Anantha Kadu (the spot where the temple stands today, previously a jungle). She fed the crying baby and left him under the shade of a tree. When she returned, she found a five-headed cobra protecting the baby from the sun. The baby, believed to be an incarnation of Lord Vishnu was then offered milk and Kanji (rice soup) in a coconut shell. When the then Maharaja learnt about this incident, he ordered a temple be erected at that spot. 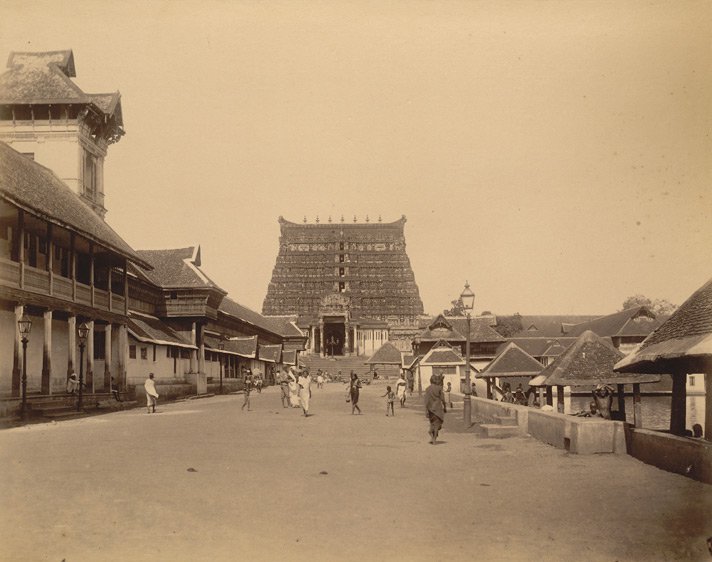 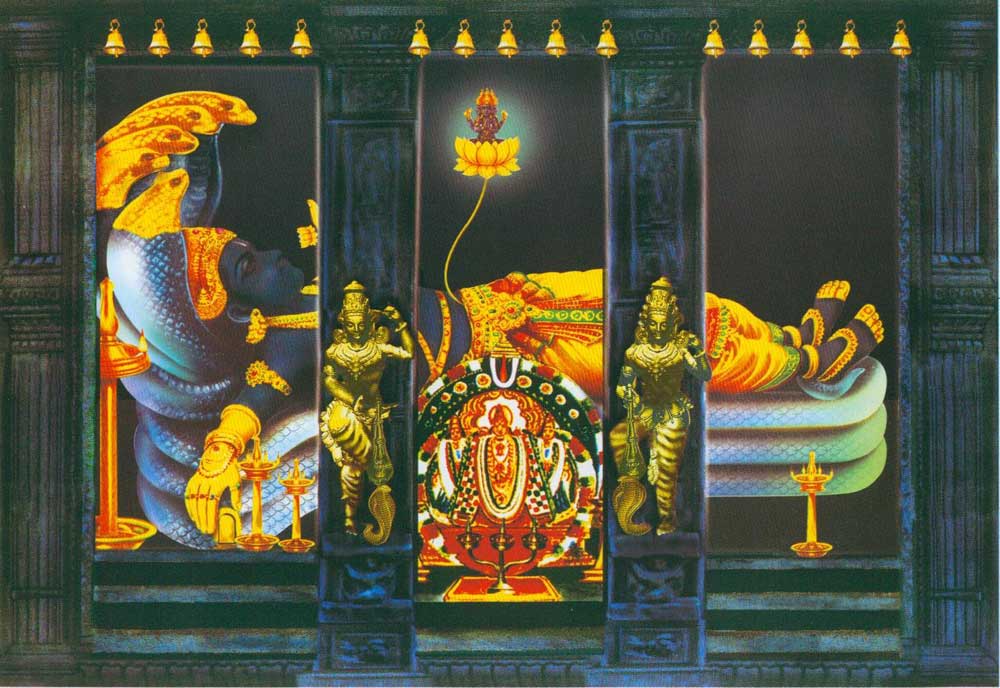 Another version of the story is about Vilwamangalam Swamiyar, a saint to whom the consecration of most temples of the Malabar is credited. He used to perform his daily prayers to the Salagramams ((sacred stones that are believed to be incarnations of Vishnu) and close his eyes as a form of meditation towards Mahavishnu so that one day he could see him. Every day during his prayers, he was disturbed by a child. Until one day out of rage, he caught hold of the child with his eyes still closed. Before the Saint could open his eyes the child revealed his true form as Mahavishnu and declared that he would only manifest in the Anantha Kadu (jungle). Never having heard of Anantha Kadu, he started running in the possible direction of this jungle. He often heard the jingle of a child’s waist ornament and kept following it. Finally, he reached a place where he could hear the cry of a baby. He saw a mother threatening the baby that if he continued to cry she would throw him into the Anantha Kadu. The saint asked the lady to direct him towards the Kadu. There, he kept exploring the area until he reached a place where there was a huge Mahua (Madhuca Longifolia) tree. Suddenly, the huge tree fell. Swamiyar saw Lord Vishnu lying on Adishesha, the King of Nagas, extending from Tiruvallam to Tiruappapur. On seeing this, the Saint prayed to the deity to shrink himself so that he could make offerings and take circumambulations (Pradakashina) around him. The deity heard his prayer. It is believed that this tree that fell was used to carve the image of the deity that is inside the Padmanabhaswamy Temple. It was the then Maharaja of Travancore who ordered that a temple be constructed over this image. This marked the origin of the very famous Sri Padmanabhaswamy Kshetram of Tiruvananthapuram.

What makes the Sri Padmanabhaswamy Temple unique is that it is the only major temple structure in Kerala that represents an amalgamation of the Dravidian style of architecture and the indigenous features of the architecture of Kerala. It is one of the most famous Vaishnava Shrines of South India and is one of the few temples where Lord Vishnu is represented in the reclining form lying on Adishesha and Brahma the creator, seated on a lotus that stems from the navel of Lord Vishnu. The Gopuram or the gateway of this temple is very similar to the temples of Dravidian style mostly found in Tamil Nadu. No other major temple in Kerala has a Gopuram of such an elaborate nature.

Sri Padmanabhaswamy is considered the principal deity of the Royal Family of Travancore. They were also the greatest devotees of the Lord. The origin of this is traced back to the reign of Maharaja Marthanda Varma who took an epoch-making decision that changed the lives of the members of the Royal Family.

Marthanda Varma who succeeded to the royal throne in 1729 is considered one of the greatest rulers of the region. Also known as the maker of Modern Travancore, Marthanda Varma strengthened fortifications, maintained disciplined troops who were trained by a Flemish officer, annexed neighbouring areas and most importantly took a keen interest in the maintenance of the Padmanabhaswamy Temple. A few structures were added to the existing one during his reign. He also reconsecrated the idol of Lord Padmanabhasawmy embedding twelve thousand Salagramams.

Flag of the State of Travancore

Elephants of the Royal Family of Travancore

In December 1749, he took the major step of dedicating his kingdom to Sri Padmanabha and assumed the title of Padmanabha Dasa (servant of the Lord). Since that day, Travancore did not belong to any one person or the Royal Family but belonged to the Lord. Marthanda Varma’s last words to his nephew, Rama Varma were “No deviation whatever should be made in regard to the dedication of the Kingdom to Sri Padmanabhaswamy and all further territorial acquisitions should be made over to the Devasom.”

It was Marthanda Varma’s sister’s son, Rama Varma who succeeded him which is what made the Royal Family of Travancore different from other Royal Families.

The Royal Family of Travancore followed the Muramakkathayam or the Matrilineal system. In this system, the women of the family had more authority than the men and they were the ones to fulfil the duty of providing an heir to the Royal Family. Thus, the heir apparent to the throne was always the Maharaja’s nephew (his sister’s son). Also, it was not the wife of the Maharaja who earned the title of Maharani but it was his sister. This meant that if the Maharani died and left behind only sons there was nobody to succeed to the throne. As a result of this, there have been situations where the family had no female to provide the rightful heir. In such cases, they quite often adopted female children who could fulfil this duty. Adoption was a common phenomenon among the Travancore Family from the earliest time. Interestingly, Marthanda Varma himself was the son of a Princess who was adopted into the family. Adoption was done from the Kolathiri family which was of an equally reputed status.

Examples of such adoptions can be seen in 1857 and 1900. Two girls were adopted into the Royal Family in 1857. These girls were placed into the family as the Senior Rani (Maharani Lakshmi Bayi) and the Junior Rani (Maharani Parvati Bayi). Years later, the Junior Rani died leaving behind three sons (Kerala Varma, Rama Varma and Marthanda Varma) whereas the Senior Rani had no heir. This again left the family in a situation where adoption was the only option.

The Senior Rani, Maharani Lakshmi Bayi was under pressure to take forward the lineage and to look for young girls who could be adopted. Hence, again in 1900 two girls were adopted into the family as Senior Rani (Maharani Sethu Lakshmi Bayi) and Junior Rani (Maharani Sethu Parvati Bayi). Unfortunately, in 1901 during the reign of Mulam Thirunal, the family went through a troubled phase that almost created a situation where there was no male heir to succeed the throne in the years to come.

It started in October 1900 when the first Prince, Aswathi Thirunal died suddenly, followed by the death of Elaya Raja Chathyam Thirunal who was the heir to the Royal Throne. The situation worsened when the Senior Rani, Maharani Lakshmi Bayi died on 15th June 1901. A letter from the Chief Secretary to the Government based at Fort St. George to the Secretary to the Government of India, explains the then position of succession in the Travancore state. A series of deaths in the family had led to a situation where, in case the ruling Maharaja, Maharaja Mulam Thirunal too died early, there would be no male heir to take the Royal Seat. The reasons were, firstly, the Senior and the Junior Rani who were recently adopted into the Royal Family were only four and three years of age respectively, which meant that they could not provide an heir in the immediate years. Secondly, even if one of them had a male heir, he could not have become the Maharaja until he was eighteen years of age. Such a situation meant that there would be no male heir until 1930.

Fortunately, Maharaja Mulam Thirunal ruled for thirty nine years till 1924. It was Maharani Sethu Lakshmi Bayi, the Senior Rani who acted as regent until the heir Chitra Thirunal turned eighteen and was eligible to take over the Throne in 1931.

The Royal Family of Travancore continued to be the greatest devotees of Lord Padmanabha. Since he was the principal deity of the Royal Family, they managed the functioning of the Padmanabhaswamy temple. The Ruler of Travancore was considered the custodian of the Temple which changed in 1971 due to the amendments made in the constitution which recognised the State of Kerala as the custodian of the temple.

Many believe that the Royal Family made large amounts of donation in terms of gold, precious stones to the Lord which today lies in the secret vaults of the temple. The Temple is known across the world for the enormous amounts of wealth that were recently discovered. The debate as to who owns this treasure continues to be contested even today.

Senior Rani who acted as regent

adoption was a common phenomenon

Padmanabha Dasa (servant of the Lord)