Love, War and History: A Tale of Mandu City

India is a land rich in history. Every region has a story to tell. Sometimes, an entire city becomes historical because it encompasses abundant built heritage from the past. While some cities like Delhi, Hampi or Jaipur are really famous for their historic character, there are others which are not as mainstream but so immensely interspersed with significant history that if we were to write about them, pages will fall short. Mandu is one such city.

Mandu is a city in Madhya Pradesh which is also known as Mandavgad. It is situated in the Malwa region which historically and politically covered the present day Madhya Pradesh and south eastern Rajasthan. It is located 22 miles from the Dhar district headquarters. Mandu is a city rich in medieval history. It has witnessed the rule of notable dynasties ranging from the Malwa Sultanate to Mughals and Marathas and is known today for its built heritage. Mandu is home to multiple architectural marvels including palaces, gateways and tanks. But for many years, these structures suffered absolute neglect. It was only in 1901-02, with the efforts of Captain E. Barnes, the then Administrator of the Dhar State that steps were taken to bring them out of ruin and decay. 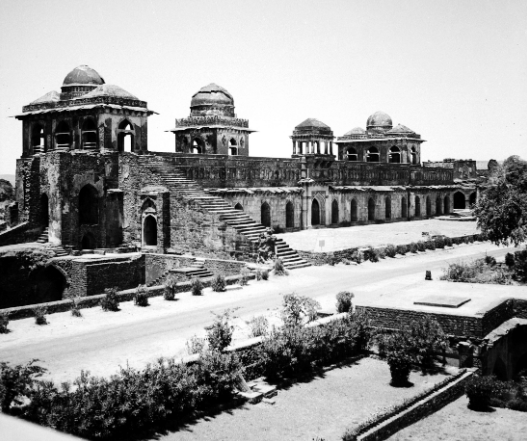 Malwa had become an important political centre during the medieval period. The first significant dynasty to rule this region were the Paramara Rajputs who ruled from 9th century to 14th century AD. Even though Dhar was their capital, they used to visit Mandu frequently. One of their most important Kings was Munjaraja who built the Munja Talao or the Munja lake which flows in front of the Jahaz Mahal in Mandu.

Gradually, the Delhi Sultans began showing interest in the Malwa region. Sources differ over whether it was Sultan Iltutmish or Balban who first conquered Ujjain in Malwa. Nevertheless, this initiated a consistent process of interaction with Malwa which lasted till the time of the Mughals. The most significant event however, was the invasion of Timur in 1398 which created political unrest in the Delhi Sultanate. Taking advantage of the rift, Dilawar Khan, the governor of Malwa declared independence from Delhi in 1401 and started the dynasty of Malwa Sultans.

The history of Mandu in a proper sense begins with Dilawar Khan. Even though the seat of his Sultanate was Dhar, he frequently used to visit Mandu and stayed there for months. He built fortifications at Mandu. After his death, he was succeeded by his son, Hoshang Shah (1406-35) who is one of the most important figures for us as he shifted the capital from Dhar to Mandu. This move in a way changed the course of history in Malwa.

The story of Mandu is best told by its monuments. It was a fortified city. The most significant gateway to the city is the Delhi Gate constructed by Hoshang Shah. Steps lead up to this gate which is now worn out because it suffered multiple sieges. Its roof has now fallen down.

Proceeding from the Gate, the road bifurcates. One leads to the Royal Enclave and the other to the Mandu village where one can experience Hoshang’s history. 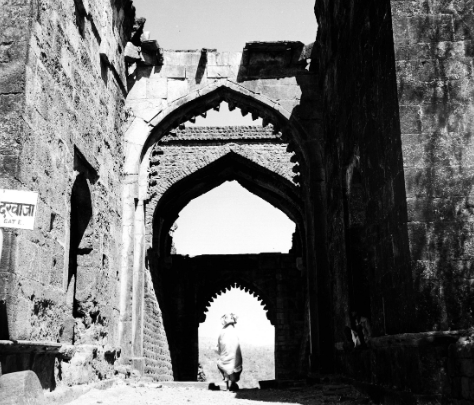 The first structure one will see is Hoshang Shah’s tomb which he himself had built before his death. It has three arched entrances in the north, south and the west. The structure is surmounted by a marble dome which is plain on the interior and decorated with blue tiles on the exterior. There are four other smaller domes on the sides. His grave is built on an elevated marble pavement. Over time, his tomb acquired a sacred character. Urs (death anniversary) was celebrated by people till very late in the 19th century. 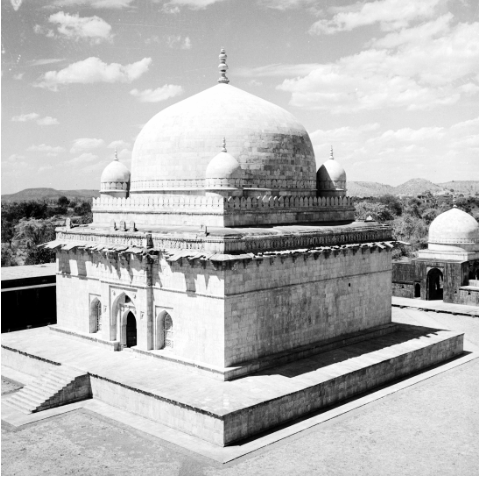 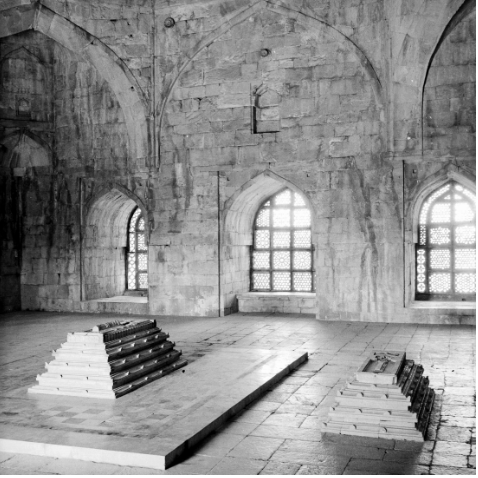 After his death, Hoshang was succeeded by his son, Ghazni Khan, who after a short reign was poisoned by his father in law, Mahmud. Initially, Mahmud acceded to the throne assuming the title of Mahmud Khilji (1436-69). During his reign, the Malwa Sultanate reached its widest limit. He seized places as far away as Ajmer and Ranthambore. Mahmud commissioned many edifices in Mandu. 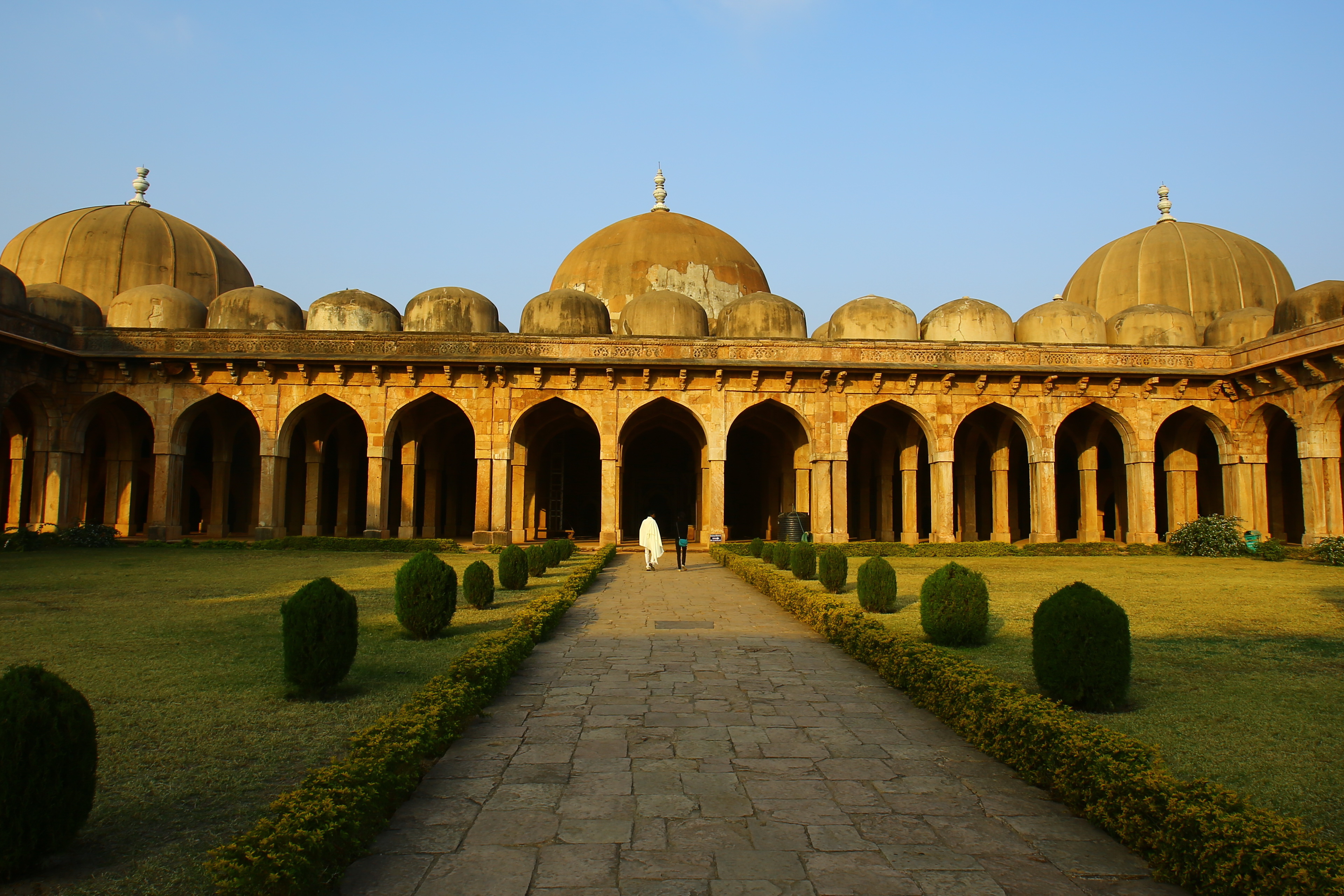 As one walks a little from Hoshang’s tomb, one can see the Jami Mosque which was initiated by Hoshang Shah but completed by Mahmud Khilji. Unlike most mosques, this one does not have minarets or much ornamental carving. A flight of 30 steps leads to the porch from where one goes to the mosque’s courtyard. The western wall facing the qibla is the only ornamented part of the mosque with 17 beautiful niches.

On the other side of the road, opposite the Jami mosque, is located Ashrafi Mahal. This structure was apparently built as a madrasa. Originally built by Hoshang, one of its corners was expanded into the Victory Tower and another into the tomb of Mahmud. The Tower was built to commemorate Khilji’s attack against Rana Kumbha of Chittor. However, it perhaps was an indecisive fight as even Rana Kumbha erected a Victory Tower in Chittor. Khilji’s tower used to have 7 stories but now only one level remains.

Mahmud Khilji commissioned his own tomb. Built entirely of marble, had it been intact today, would have been one of the most fascinating sights in Mandu. It’s built on a base 24 feet above the land and has three arched gateways which lead to the mausoleum. Over time, the grave had completely sunk beneath the ground. It was recovered under the instructions of John Marshall in the early 20th century and now has become visible.

Mahmud died and was succeeded by his son Ghiyathuddin (1469-1500) who had been a general all his life. Later, his son Nasiruddin assumed power as the next Sultan in 1500 AD. 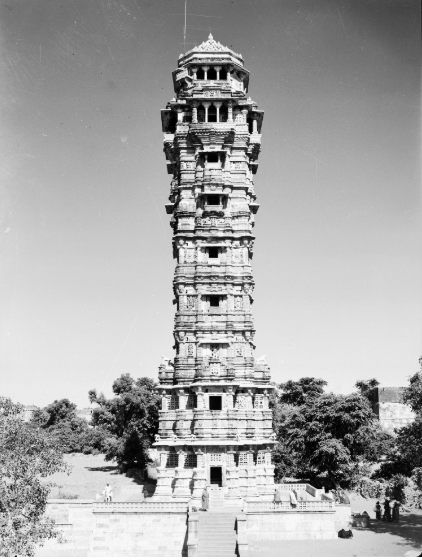 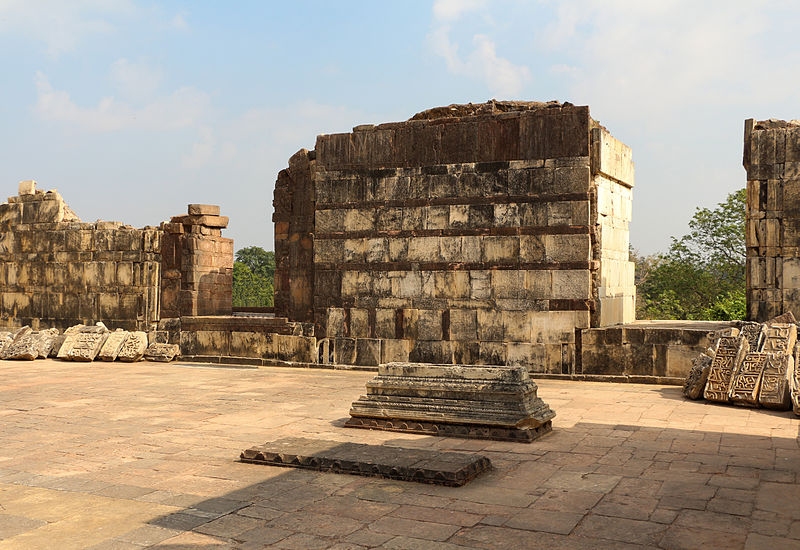 To see the edifices built by Ghiyathuddin, one needs to get out of the Mandu village. The road from Ashrafi Mahal goes northward to the Royal Enclave. The most notable architecture of the enclave is the Jahaz Mahal or the Ship Palace. It is called so because of its elongated frontage and the fact that two tanks, Munja Talao and Kapur Talao encircle it in front and rear giving it the appearance of a ship. It is attributed to Sultan Ghiyathuddin and it is believed that he used it as his harem. These tanks were used by royals for swimming.

In the north west of the Jahaz Mahal, Champa Baoli is located. The base of this Baoli is located in a series of vaulted rooms or taikhana, which were used by royals to escape the scorching heat in summer. Steps descend from the taikhana to the Baoli. Nearby, the remains of a hammam or bath can be also seen.

Not very far from the Baoli, the famous Hindola Mahal is located. Hindola means swing. It’s so named because of a slope on its side walls which make it appear as if the building is swinging. It was probably built during the reign of Ghiyathuddin and was perhaps used as an Audience Hall by the King. 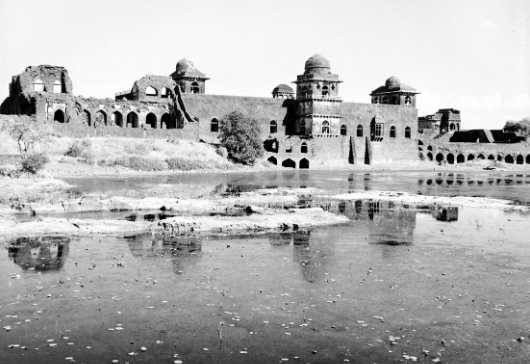 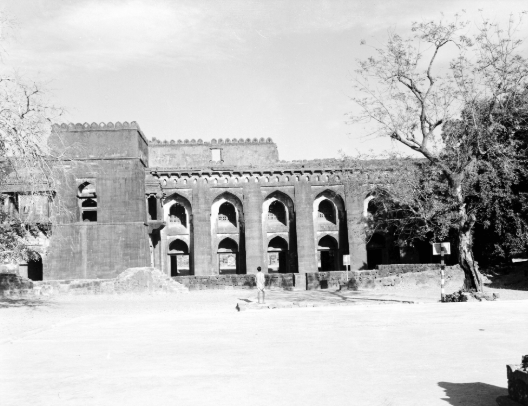 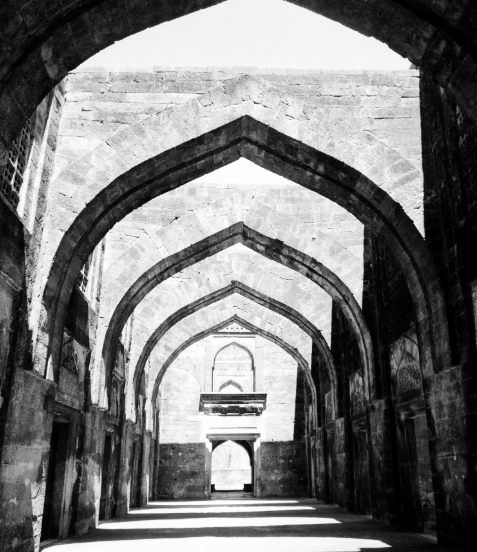 The Royal Enclave has many other monuments like the Nahar Jharokha, Hathi Pol Gate, Ujala Baoli, Andheri Baoli, Dilawar Khan's mosque, Sagar Talao, Gada Shah’s Tomb, Caravan Sarai, Jali Mahal etc. From the hill down to the Jali Mahal, the road takes a turn towards the east and then further to the south reaching an enclosure which, it is believed, is home to the famous tale of love between Baz Bahadur and his sweetheart Rupmati. 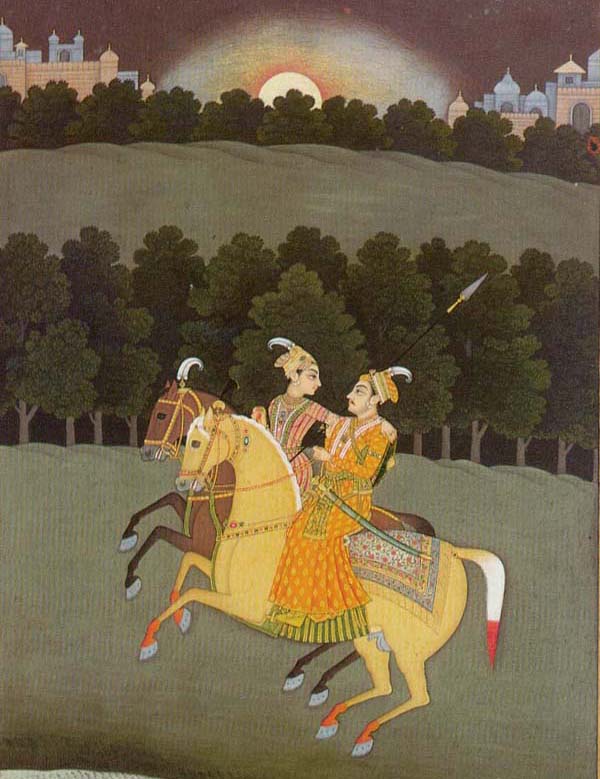 After Nasiruddin’s accession, unrest began to spring up in the Malwa Sultanate. Succession rivalries emerged between Nasir’s sons which paved the way for the entry of external political forces. In the power struggle which ensued, Gujarat Sultans ended up assuming power in Malwa region. Malwa was under Gujarat till 1534 AD. Later, it was attacked by Sher Shah of the Sur dynasty. Shah appointed Shuja Khan as the Governor of Malwa. He had three sons, Daulat Khan, Malik Bayazid and Mustafa Khan. Malik killed his brother Daulat, and acquired kingship as an independent ruler of Malwa, assuming the title of Sultan Baz Bahadur in 1555.

Baz Bahadur is known for his fondness for music and his love affair with Rupmati. It is said that one day, while out for a hunt, Baz Bahadur heard Rupmati singing. Completely smitten by her voice and her beauty, Bahadur expressed his love and thus started one of the most famous love stories in Indian history.

The memory of their romance has been beautifully preserved in the structures of Mandu. The monuments associated with the lovers still echo their love. In the enclosure, the first thing to see is the Rewa Kund, a reservoir built by Baz Bahadur with an aqueduct to supply water to Rupmati’s palace nearby.

To the east of the Kund, there is a hill atop which stands Rupmati’s Pavilions and at its foothill, lies Baz Bahadur’s Palace. It is said that from the top of the hill, Rupmati used to catch a glimpse of her love and of the Narmada river flowing by. There’s an inscription at the gateway of Baz Bahadur’s Palace stating that it was built by Nasiruddin but Bahadur developed a liking for it as it was situated near Rupmati’s Pavilion. He made many extensions to the Palace. 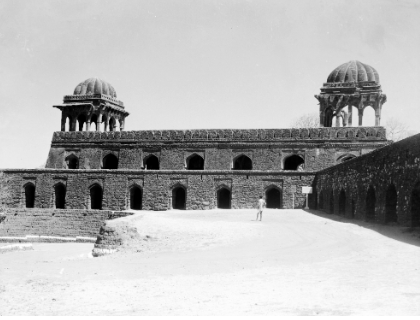 In 1561, Akbar sent an army commanded by Adham Khan to capture Malwa. Defeated in the battle, Baz Bahadur was forced to flee leaving his kingdom at the mercy of the Mughal army. Rupmati too, was abandoned by Baz Bahadur. When Adham Khan made advances to her, Rupmanti committed suicide. Thus, while Rupmati saved herself from falling into the hands of the imperial forces, Malwa could not . Akbar attacked Malwa again in 1562 making it a province of the Mughal Empire. Baz Bahadur was admitted into Akbar’s administrative system as a Mansabdar of the rank of Amir-al Kabir. 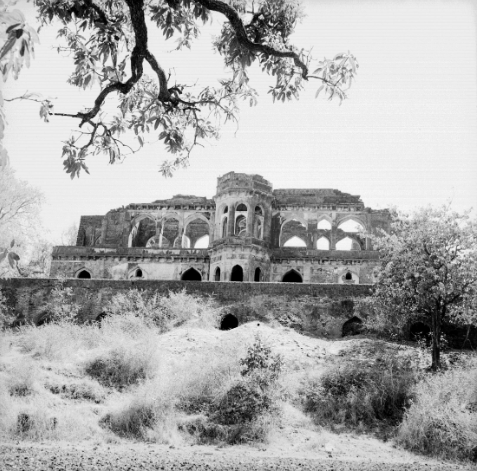 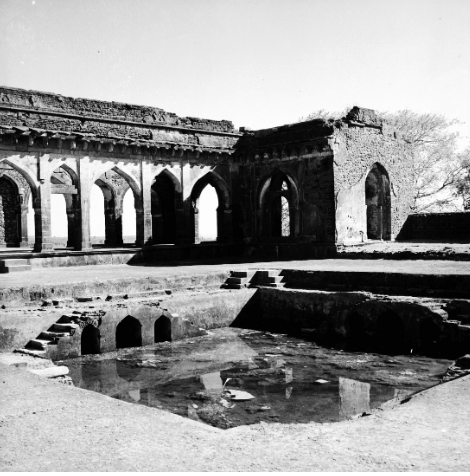 The love story of Baz Bahadur and Rupmati has defied time and it is still remembered in folk songs. Some songs attributed to Rupmati herself are sung till today.

Friends, let other boast their treasure
Mine’s a stock of pure love’s pleasure
Safely cared for every part
Beneath that trusty lock my heart.
Safe from other women’s peeping
For the key is in my own keeping.
Day by day, it grows a little
Never loses even a tittle
But through life will ever go
With Baz Bahadur, weal or woe!