The cuisine of Manipur reflects the geographical and socio-cultural peculiarities of this land situated in the North-Eastern part of the Indian subcontinent. The culinary fare of this region reflects the intimate connection of its people with nature. With an exciting ensemble of flavours ranging from plain to piquant, Manipuri food is an absolute delight to the senses. 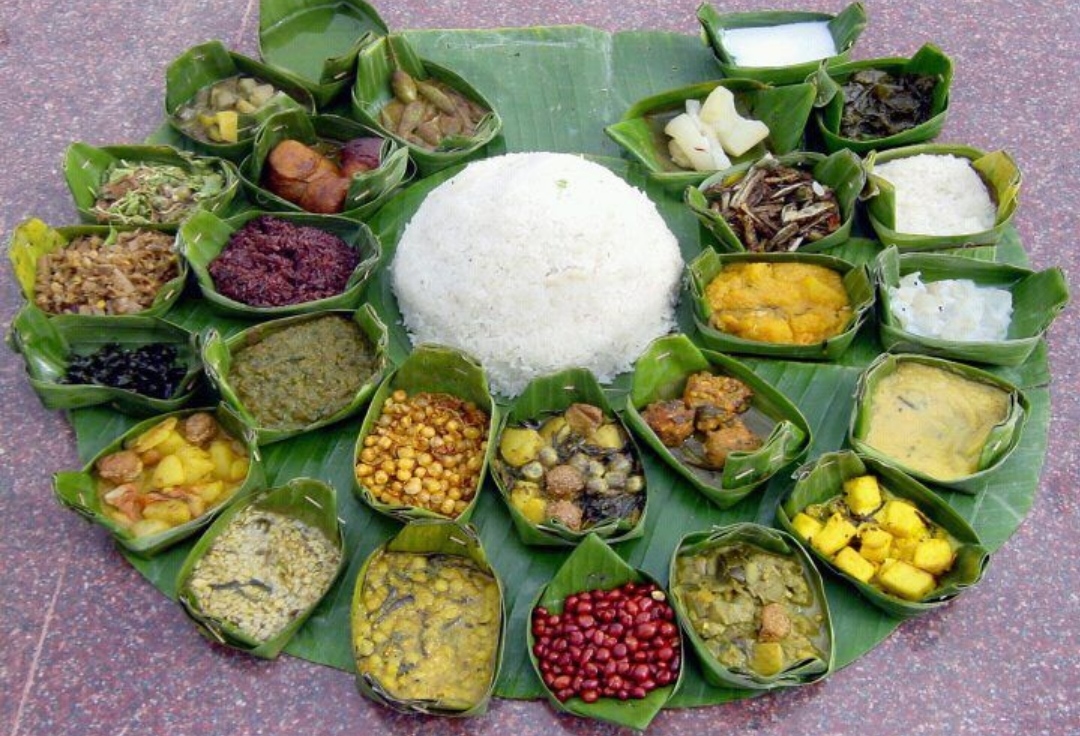 A traditional spread of Manipuri dishes

To have a closer understanding of the Manipuri cuisine, a brief overview of the geographical and socio-cultural features of the land is important. The state of Manipur is endowed with a stunning diversity of flora and fauna and is one of the recognised biodiversity hotspots of the world. The geographical formation of this region can be divided into two main categories: a central valley and the surrounding hills and mountains. The state has an impressive forest cover of 67% of the total landmass. Aquatic bodies such as lakes and swamps also constitute a prominent feature of this region. The ecological diversity is closely matched by the socio-cultural and ethnic diversity of the population. Apart from the Meiteis who comprise the ethnic majority, there are 29 major tribes that belong to two ethnic denominations called the Naga and the Kuki. Agriculture is the mainstay of the economy. Wet rice cultivation is practiced in the valley while the tribes inhabiting the hills mostly engage in jhum cultivation. The socio-cultural, as well as economic lifelines of the region, depend heavily on the exchange of resources between the hills and the plains. The food habits of the region are conditioned by the geographical as well as socio-cultural diversity of the region.

Manipur, a land of exquisite topography 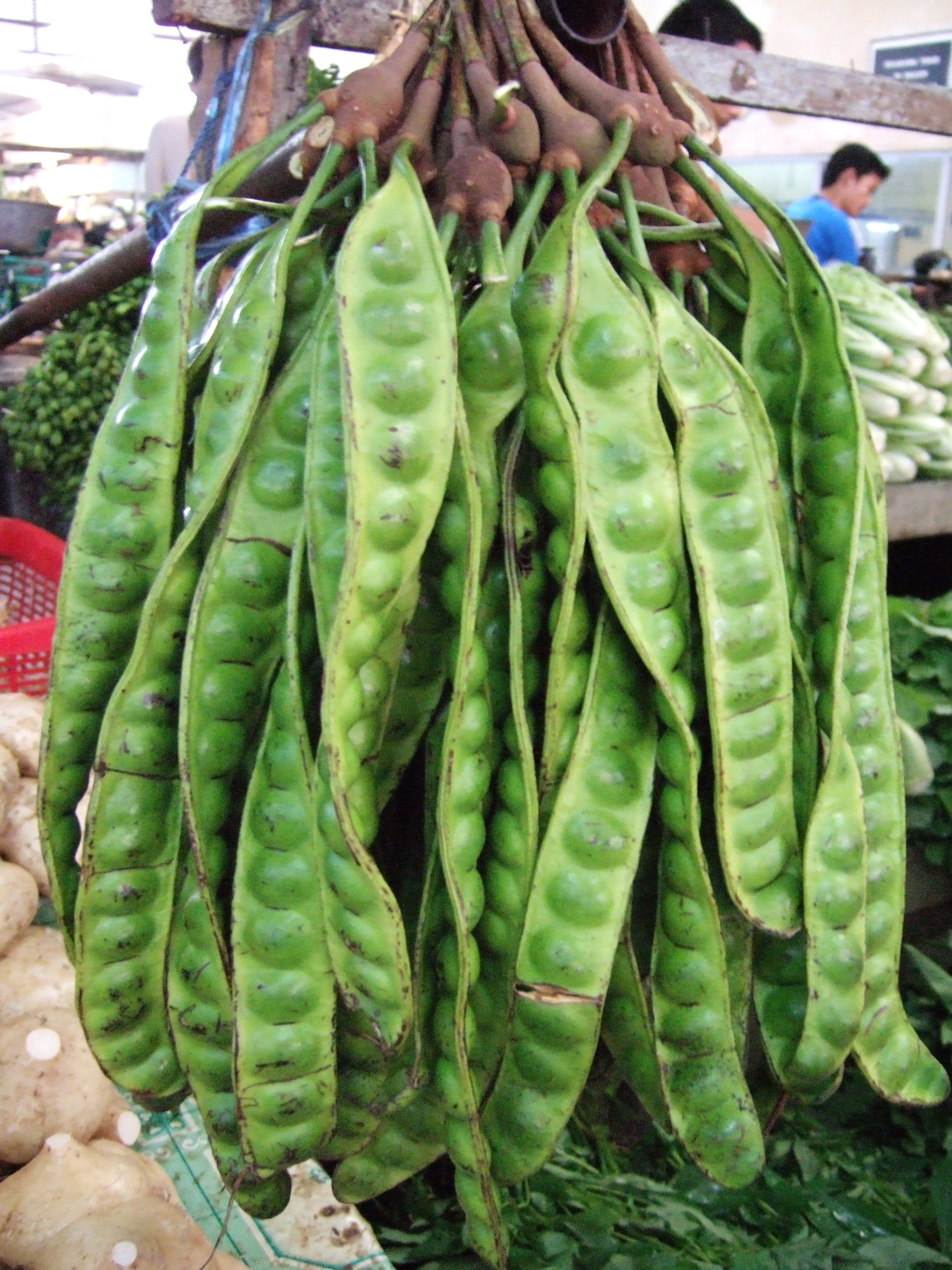 Manipuri Cuisine is marked by abundant use of rice, fish and leafy green vegetables. The region experiences heavy rainfall of over 1000m annually and is thus suitable for the cultivation of several small, long-grained and scented varieties of rice. As the region is dotted with many small and large water-bodies, fish is also found in abundance. Apart from fresh catch, fermented and dried fish called ngari is an important ingredient of a majority of dishes. 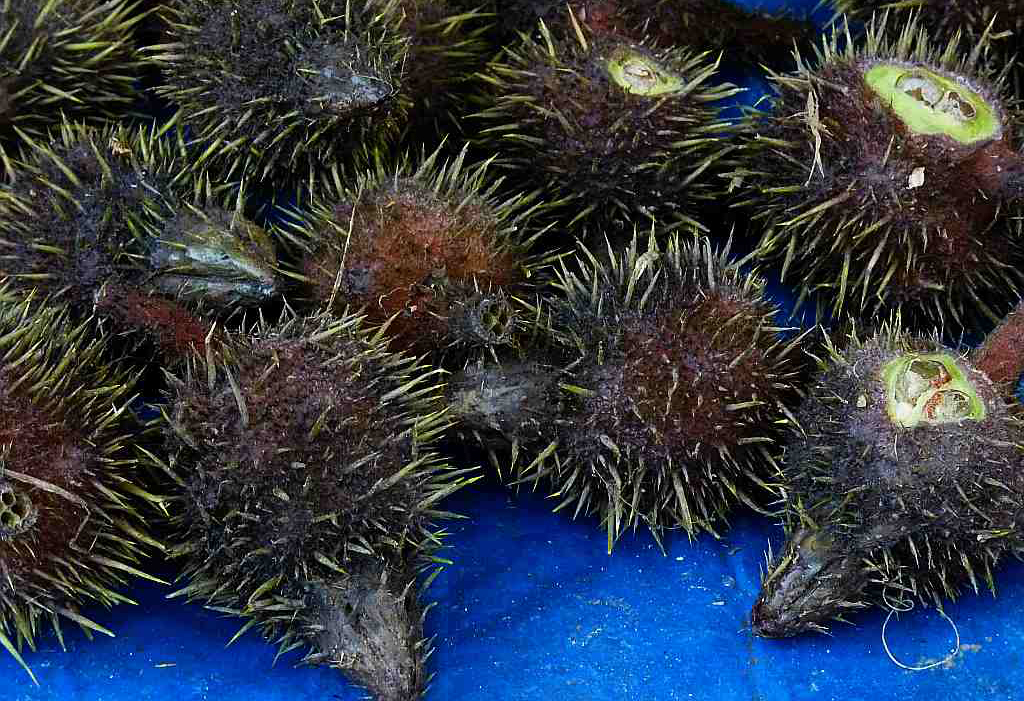 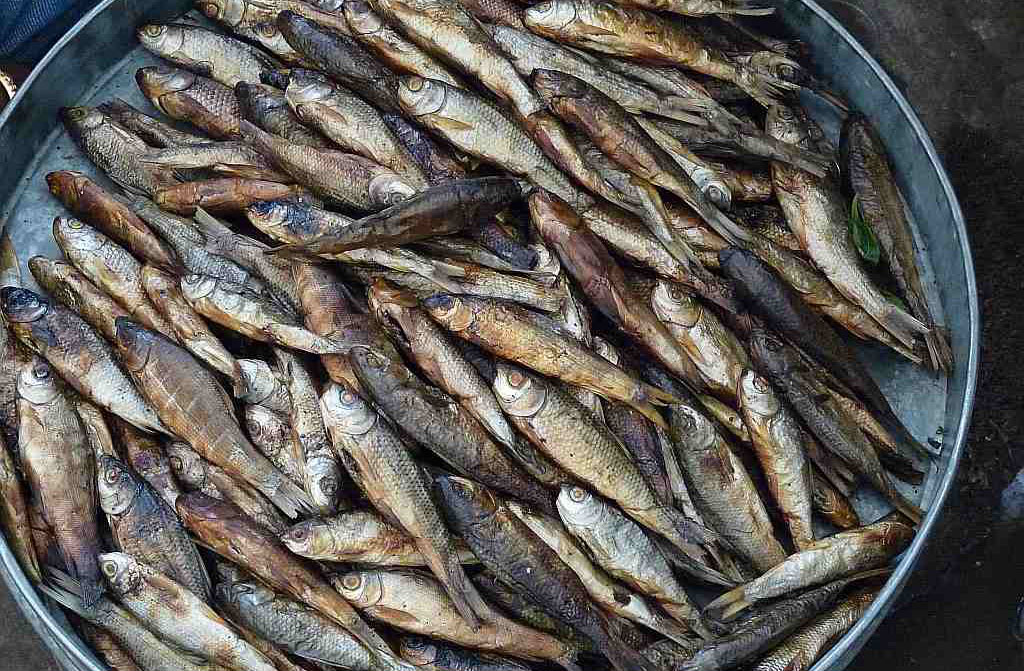 Manipuri food is also marked by the use of a variety of vegetables, many of which are exclusive to this region and not known in the rest of the Indian subcontinent. The vegetables are mostly grown at home by the householders or are procured from the local market. As a result of this, the dishes of the Manipuri cuisine are predominantly seasonal and organic. The common vegetables that are indigenous to this region include pumpkins, various kinds of beans, gourds, brinjals, etc. Vegetables that were introduced under the rule of the British include potatoes, cabbage, tomatoes, radishes, peas, carrots and turnips. Apart from this, vegetables that are unique and native to this region are yendem (a kind of taro), kolamni (water spinach), thangjing (foxnut), koukhaa (katniss), yongchak (a variety of bitter beans), sougri (roselle leaves) and so on. 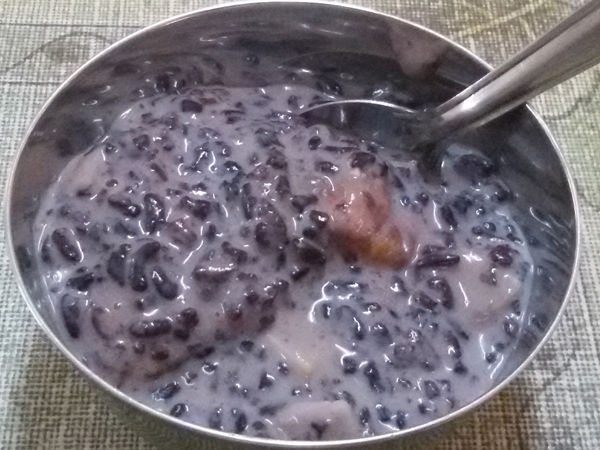 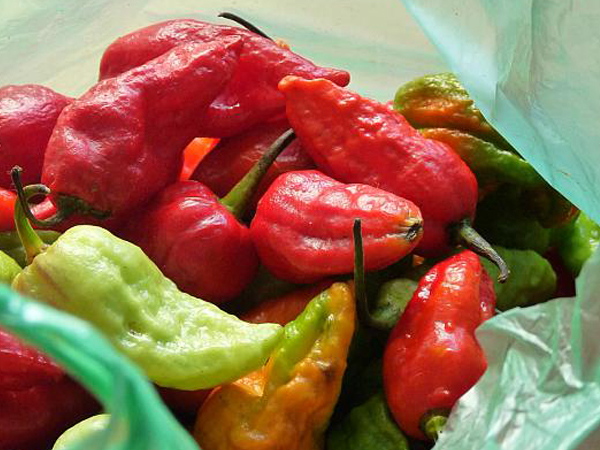 A typical Manipuri meal consists of the following dishes: steamed rice (which is the staple) is accompanied by kangsoi (a vegetable stew with ngari), ooti (a thick curry made of green/yellow peas, chives and beans), ngaatiobathongba (a curry made of fish), kanghou (stir-fried vegetables), eromba (a mash of boiled vegetables, ngari and chilli), singju (a salad made of seasonal vegetables) and morokmetpa (a paste of roasted chilies, ngari and garlic). An exotic dessert called chakhao (a pudding made of black rice) completes the meal. The most popular methods of cooking involve boiling and steaming. Oil is used only sparingly. Yet, fried items such as various kinds of boras or fritters also exist. Ingredients such as bay leaf, onion, ginger and garlic are added for enhancing flavour and aroma. A major spice which features in most dishes is the umorok or king chilli. 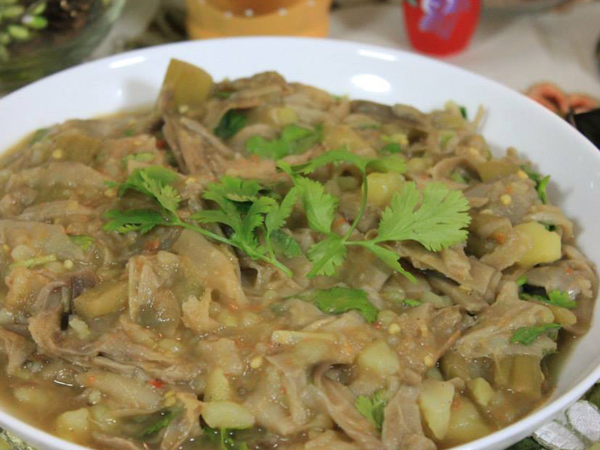 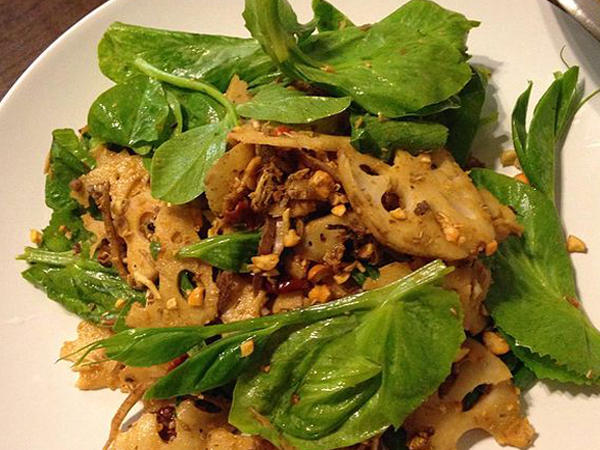 A significant feature of the Manipuri cuisine is the use of aromatic herbs and roots. These ingredients lend the Manipuri cuisine its unique character and also endow the food with nutritional and medicinal values. The use of these herbs and roots by the communities inhabiting this region, reflect their traditional knowledge of the cycle of nature and the wild flora and fauna. For example, various exotic species of wild mushrooms form a part of the Manipuri cuisine. The knowledge of identifying the edible from the non-edible varieties is crucial. Such knowledge is handed down from one generation to another and is an integral part of their social and cultural life. It stands testimony to the intimate connection of these communities with nature and their sustainable use of natural resources. 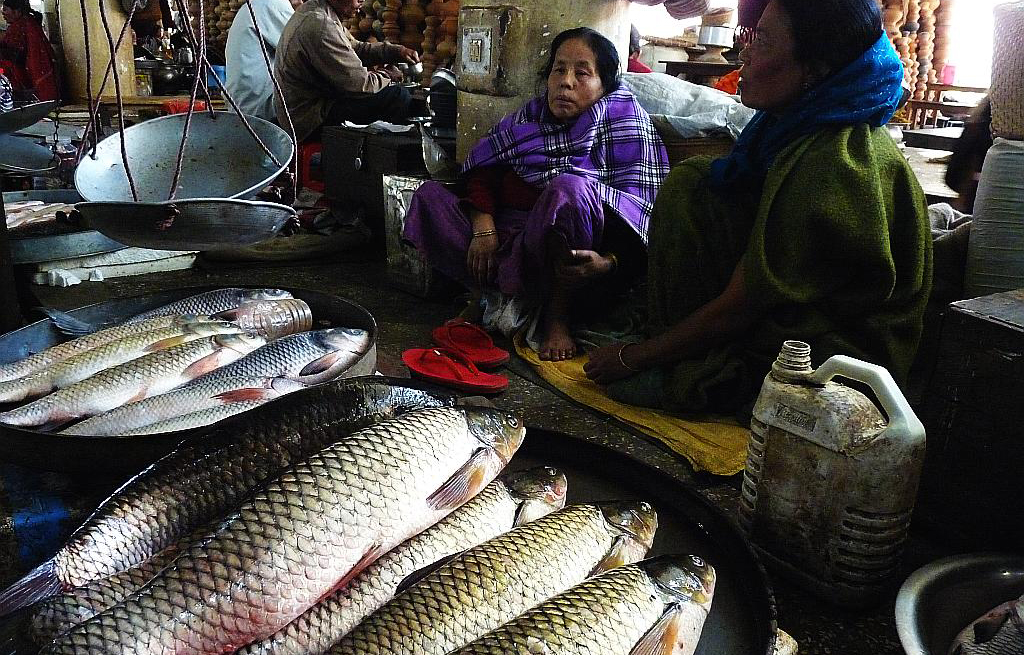 Another defining feature of Manipuri cuisine is the use of various forms of fermented food items. Apart from fish, the repertoire of fermented foods also includes tender bamboo shoots called soibum and a dish made of fermented soya beans called hawaijar. As discussed earlier, in Manipur, a predominant area of the landmass is covered under forests, hills and mountains and water bodies. Thus, the area of land under cultivation is low. Traditionally, the fermentation of certain food products ensured that they were available throughout the year. The process of fermentation also adds to the nutritional and pharmacological qualities of certain food items, apart from enhancing their flavour. Sometimes, elaborate techniques are used for fermentation. For example, ganangtamdui is a traditional preparation in which mustard leaves are dried in the sun and then kept in bamboo culms till they release a pungent odour. The leaves are then pressed to extract their juice which is then boiled. This liquid is preserved and used in the preparation of a soup called tam. The dishes prepared by using fermented products are usually characterised by delightfully piquant flavours and aromas and might require some getting used to for people who have not yet been initiated into this unique cuisine. 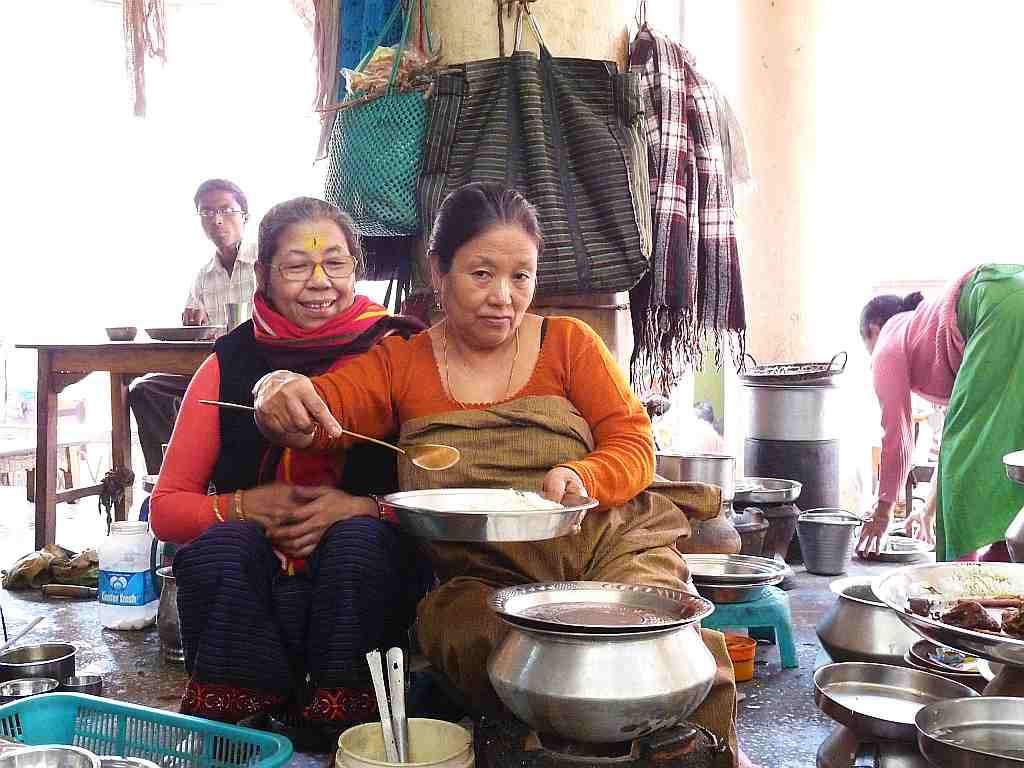